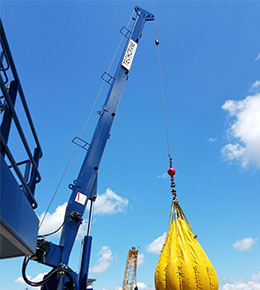 Techcrane is proud to announce delivery of two F10-40 (5 Ton Fixed Boom) cranes to Harvey Gulf (HGI) for the M/V Champion and Supporter for their new quest to Nigeria and West Africa. The project arrived with short notice and time was of the essence in order preserve the commitment. Through the process of “fit for purpose” determination, it was concluded that the Techcrane 5 ton capacity crane would be the most ideal choice. Due to the availability of stock components and most importantly the preparedness and efficiency of the Techcrane design and production team, Techcrane was able to meet the needs by delivering two (2) Model F10 cranes complimented with custom designed extended pedestals and hydraulic power unit in less than 2 weeks deploying over 180 “man-hours” of overtime.

Meeting the needs of a client requires an efficient and well managed Quality Management System (QMS). In this scenario, there is little room in the project timeframe for any rework. The careful precision of the Techcrane Welding Core was able to work around the clock while working around carefully timed 3rd Party NDE hold points. Techcrane welding to achieve an objective of less than 2% of the total linear weld having indications. Adding a finishing touch, Techcrane was able to offer the appealing “HGI Super Blue” coating by PPG within this narrow timeframe. The Techcrane Assembly and Service Core was able to prepare the builds within the first week using their quality stocked components from vendors such as Eskridge, Rotek, to insure product delivery and customer compliance.

Despite the struggling Oil and Gas economic climate, Techcrane has met success with its market diversity. This approach affords Techcrane’s ability to serve all of its clients for their long and short term needs. Techcrane has achieved its objectives debt free for over 40 years. Techcrane’s mission is the innovation and production of quality products and services for its client, Harvey Gulf and the World Market.